Even if it is recommended to carefully remove your makeup each night before going to sleep, most of us know what it is to skip the make-up removal box and go straight to bed, with your mascara … This attitude can seem so harmless that for some women it becomes a habit, especially since it requires less effort, especially if you are tired after a long day.

However, sleeping with your mascara on is a big mistake and can lead to serious health risks. If one has paid the price, it is certainly Theresa Lynch, a 50-year-old American who for 25 years never took off her mascara before going to bed and almost lost her sight.

One day, for no apparent reason, Theresa noticed that her eyes were irritated. She felt something uncomfortable under her swollen eyelids and after she used eye drops in an attempt to relieve her symptoms to no avail, she decided to go to her doctor.

What he discovered came as a shock to both him and Theresa: there was a multitude of small black calcified bumps under her eyelids that had formed over the years from the residue of mascara.

These concretions that were deeply embedded in the inner membrane of her eyelids put Theresa at serious risk to her vision. So she had to have them removed during surgery under general anesthesia. 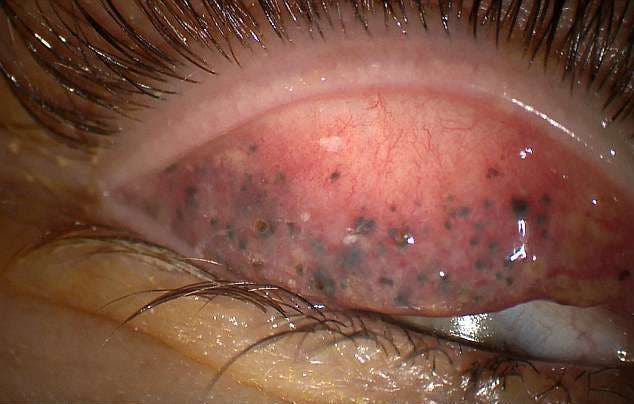 Theresa’s eyelid. The black spots represent the concretions where the mascara residues accumulated over the years have become embedded. 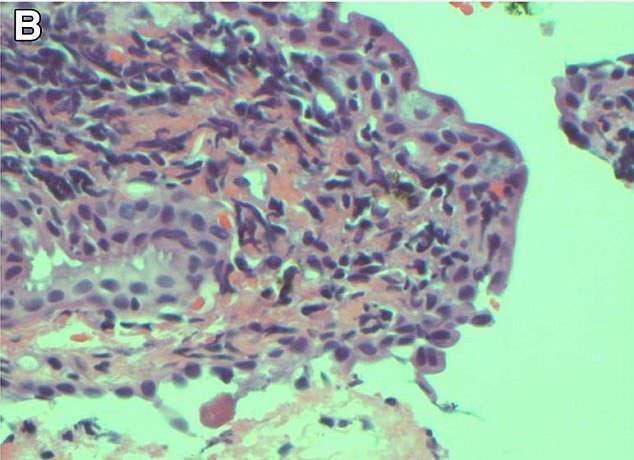 Biopsy of the tissue removed during the operation. In this image, you can see the accumulated mascara particles. 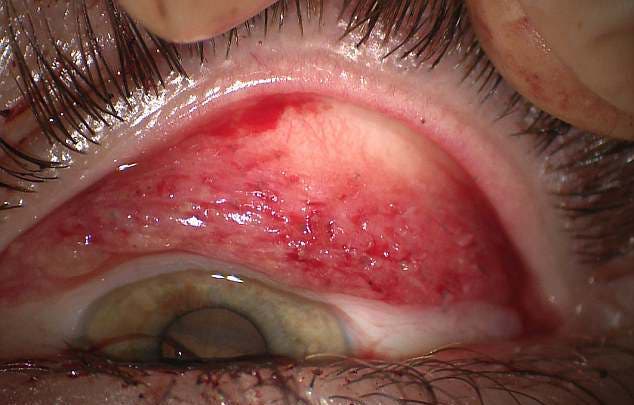 Theresa’s eyelid after the operation

“ She has permanent scars on her eyelid and the surface of the cornea. It was something incredible, I had never seen anything like it. But this is a risk that few people are aware of. “

Few women are in fact aware of the risks to their health of certain attitudes which they adopt recklessly in everyday life and which can, if repeated over time, cause a great deal of damage to their beauty, but also to their health.

The damage caused by keeping your makeup on all night

Not only does wearing makeup all day have deleterious effects on the skin, on top of that, keeping it on for many hours of the night without cleaning it can seriously damage your skin health and skin. its radiance: when it is almost constantly under a layer of foundation, powders, and other cosmetic products, the skin ages faster, it is damaged, becomes dehydrated and there is a greater risk of suffering from discomfort such as acne.

How to preserve the skin of your face?

With regard to cosmetics and makeup, special attention should be paid to their composition. There are many that contain harmful and toxic substances. It is wise to go for brands whose products are free of perfumes, additives, and dangerous chemicals, or even 100% natural.

If you want to keep your facial skin looking beautiful and healthy, it is essential to remove all traces of makeup before bed. It must be done systematically.

Wash your face morning and evening with cleansing products that respect the pH of your skin and are as natural as possible.

Moisturize and nourish your skin with natural products, oils and make homemade masks based on natural ingredients. Exfoliate once a week to remove dead cells and stimulate cell renewal.

Choose fruits and vegetables and avoid processed foods. Avoid alcohol which accelerates the aging of the body’s cells and tobacco, which has disastrous effects on the skin in particular.

Get enough sleep and oxygenate yourself by practicing regular physical activity and breathing clean air, because oxygenating cells is one of the greatest secrets of beautiful skin.